Everything begins at the zero point and at the zero point everything ends. Many times we do not know the end, but we know the beginning, it is at the zero point.
Interestingly, our ancestors in Europe did not know zero at all. However, the Mayans knew it and also knew how to use it. Therefore, classical numerology, which originated in Europe, does not use 0. In the western occult tradition, zero is a symbol of eternity. It is surprising that it made its entrance to the Western world just a few hundred years ago. Its introduction greatly helped the development of modern mathematics, science and technology. In the East, where it was known since the dawn of civilization, 0 is called Sunya (shoony) or the void, which is the cornerstone or fundamental of Buddhism.

Zero is considered unlucky. When a zero appears in a date of birth it can bring misfortune. Even the tenth month of the year, October, being a 10, brings bad fortune, even if to a lesser degree. A zero in the year of birth brings a minor misfortune. Combining 0 with any other number reduces the influence of that number. People who have a zero on their date of birth will generally have a harder time than those who don't. The presence of more than one zero in the date of birth, for example, October 10, 2020, makes it necessary to work harder in life.

Zero is a word that derives from the Arabic cifa, which means "empty". It is the value that allows others to exist and multiply.

0 represents the natural birth path of energy. A legend tells us: "Athena, goddess of intelligence, came out through a hole that Hephaestus made in the skull of Zeus." It is a powerful and unique allegory. Louis-Claude de Saint-Martin tells us: “This is not a number. That figure has no real content. Why do we have to be interested in it? Precisely to signify this reality that corresponds to its natural affectation. The 0 marks the Universe, controls the mobility of the powers, just as the 1 controls the fixation of the centers. It has no value on its own, but its presence uniquely gives the numbers it accompanies a higher power called by delegation. "

We cannot properly understand zero as a number, although it has its symbology. The 0 represents the Universal Matrix that contains everything. Therefore, this number cannot be considered the same as the rest, which are included in it. All other numbers represent something that is contained within zero, but each of them and its many aspects have no direct relationship with what it contains. Zero is simply the container. It does not affect the aspects of what it contains but gives them the possibility of existing.

Zero is a circle in its own way of writing. This circle represents a continuous line that has no beginning or end. It is the concept of the Alpha and the Omega that the Bible describes, the concept of the primal energy that permeates and composes everything. But in this case it is a containing energy and not a creative one. The creative energy itself is included within this concept of zero. The circle also represents what can be included in and what is left out. It is the idea of the whole, which groups together a series of possibilities and leaves out the rest. Represented by a circle, 0 has no beginning and no end. It is the limitless expansion of energies and vibrations.

The number 0 is the number of the force "Containing God" and the "Universal Energies" with all their laws. It reinforces, amplifies and magnifies the vibrations of the numbers with which it appears. In a numerical sign without value by itself, but occupying the place of the absent values in the numbers since. By its position, it gives the others numbers more value. Zero multiplies the numbers to its left by 10. It is, therefore, an enhancer of the energies of the other numbers.

Zero means NOTHING, but it contains everything. If everything is lost, there is nothing. If you have nothing, you have absolute freedom. Therefore, the zero in various numerological and mythological systems signifies a return to absolute freedom and to God. The axiom that defines it could be: "Beyond the emptiness of the Universe come all things."

Taoist theory states: "You look at the sky and you only see emptiness, but when you look through a telescope, you see many other things like the moon and stars." "From NOTHING comes ALL", and this would probably be the best definition of zero in Numerology.

Zero has no value when it is alone because it is abstract and the numbers are concrete. When zero is added or subtracted from a quantity, it remains unchanged.

Zero was born in India, but was baptized in Europe. It was the Italian mathematician Fibonacci who popularized the Indian-born decimal system in the West and who began to use the word zero to designate the symbol of nothing.

For Pythagoras it was "the cosmic egg" that contains everything and from where the first energy is born.

Meditation return to zero = return to the beginning. Going back to 0 is also prayer, absolute freedom.

The discovery of zero was a great knowledge for humanity, both scientific and spiritual.

Personal numbers from 0 to 17:


Basics of the numerology
Numerology for today


Number 0 message: The number zero refers to meditation practice and prayers. God is speaking to you. Emphasized link, Higher powers are asking you for attention and following their advice without delay.

Have you ever received a message that contains the number 0 and has no logical explanation? These things interest us a lot. Please write to us about it here or on facebook.

In classical numerology, but also in other numerological systems, this hour is known as the hour of miracles. From an energy point of view, it is midnight, which means that everything is over and a new day begins. If you're not asleep right now, it's time to go to bed and recharge your batteries for a new day.

All Hour - Generally, the beginning of each hour is the best time to start something new. The human brain used to hour and minute intervals is best concentrated at the beginning of the hour and therefore at X:00

Born in the lunar age 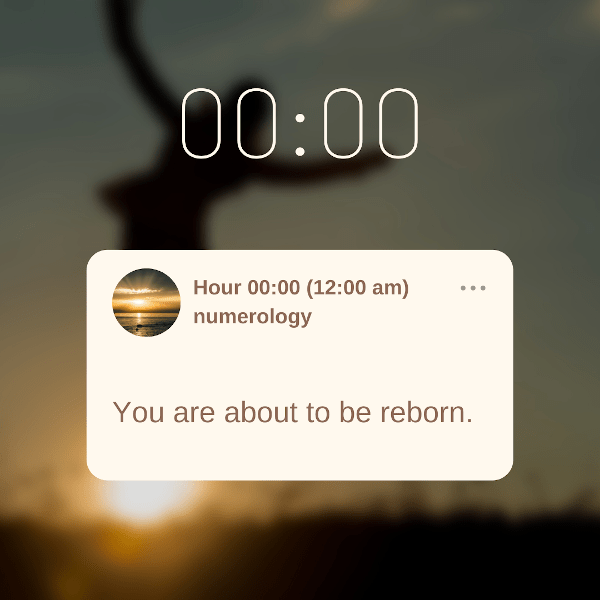 You are being shown by the angels that you have reached the end of a cycle, and you are about to be reborn. In terms of your spiritual life, you are entering a new phase. Your angels will assist you when studying sacred texts and divinatory texts.

As you work with the different energies of the 72 angels, you should practice meditation in whatever way is convenient for you. In this way, you will be able to control what you are internally talking about, particularly when it becomes overwhelming.

You can tell that there are vast forces operating around you at the hour of 00:00. Although you feel like some aspects of your life are difficult to control at the moment, this isn't going to last. The last thing you need to do is to tame energies that often manifest negatively.

As well as attempting to warn you, the double hour is also trying to alert you to the possibility that someone dear to you will no longer be available. This double hour implies a sacrifice as well.

Dreams with the number 0

You may have seen the number 0 in a movie, song, event, book, or article. If it has been a strong experience, number 0 will appear in your dreams. The number 0 can mean age.

How to avoid dreams or nightmares with the number 0 Have you ever dreamed of the number 0? These things interest us a lot. Please write to us about it here or on facebook.

Nina M Matrazzo   Oct. 2, 2021
I dreamed about a circle (or zero). I was told to calculate all the circles inside and became excited to do so. Then I became awestruck when I realized there was no answer. That the number was infinite.
reply

Number 0. The meaning of number 0: Basic maths, advanced mathematics and properties, computer science, numerology, codes and images, writing and naming in other languages. Other interesting facts related to 0.